At Lasting Memories there is a colour challenge. 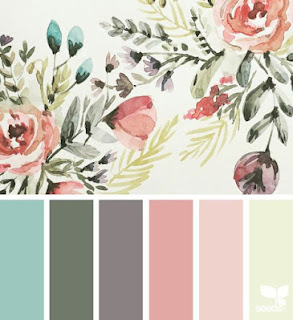 My first problem was I don't have much floral paper,especially in those colours.

I decided to feature a cluster on the layout instead.

Two of the papers in my kit are tawny pinks,somewhat darker than the palette, but still similar tones. I used those as my background.The one going across is Ruby Rock it "Faded Empire". I matched the greens fairly well and included bottle green in the ric rac as that was our school colour. The pearl flourish is from Flourish with a bling.

The story behind this is I was "recruited" into the school choir in 1967, aged 12, for the official opening of the school. The song we sang was Gaudeamus Igitur and as none of us spoke latin, we rote learnt it! 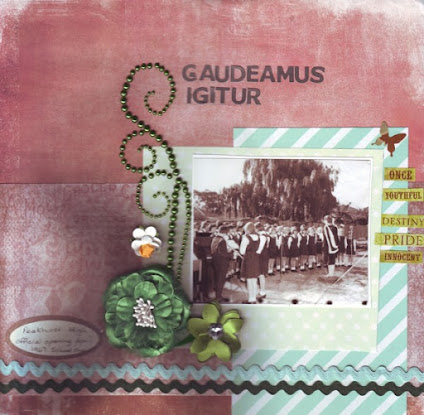 Posted by Julene Matthews at 16:05

Love the flowers and bling and great job with the color inspiration! Thanks so much for joining us at Lasting Memories! ~Deanna :)

Love your colour choice Julene, the ric rak and flourish are perfect for the mood board. Thanks for joining in this week at Lasting Memories. Design Team Member Maureen

Beautiful layout. love the flourish and perfect colors or the challenge.
Cindy F

Great choices with the colours Julene. Thanks for joining us at Lasting Memories.