Challenge #2 It's all relative.

Our family has always thought Mum looks like the queen.
The only one who can't see the resemblance is her.
Though she is 7 years older she is very similar in hairstyle,dress and general appearance.
In this photo of her 21st(in 1939),I think she looks particularly regal.
I downloaded a picture of the queen and cut around it.I added pearl flourishes and embellishments and used Mum's favourite colour-blue. 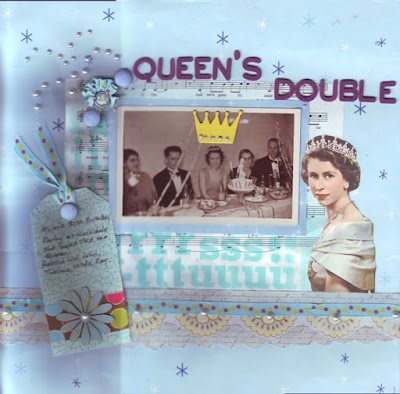 (Yes, the ribbon and lace does run downhill! It was based on a sketch that did that.
I tried several times to stitch without the shadow on the left but those fabric brads are too high to flatten it any further.)

I've included 2 more photos of Mum below so you can see it is not "a one off"All she needed on that picnic rug was a corgi to make it complete. Posted by Julene Matthews at 18:00

Terrific job with the challenge Julene! I agree, your mom has a great resemblance to the queen. I love how you fancied up the page with the scalloped border and pearls!

Wow - she really does look like the queen! Your layout has a nice regal touch too with the pearls and scallops and that background paper with the little starts/asterisks.

They truly do resemble each other! Nice little touch with the crown over her head, and I really was entertained by the other two photos in your post & the comment about the corgi, lol! Very sparkly page to play on QE's photo.

Great play on words for your title Jukene Lovely LO

The crown over her head is the perfect touch for this fun layout. You know what a fan of QE I am!

What a great layout! Such a great story to document!