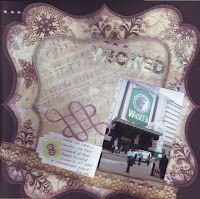 While we were in London last year we went to see "WICKED" at London's west end-Apollo theatre. The show was fantastic and Erica was in her element,being a theatre designer.
I chose to do this layout with purples and black rather than the green.The sketch was on a new site I have discovered Scraphappykat.The papers and embellies are from my $50 prize, the paper being named "Snowy serenade prelude" by Bo Bunny.The musical words on the page say "sparkle on a lonely winters night" which inspired me to scrap the wicked photo.It describes Elphaba. I love the way this has turned out!

Posted by Julene Matthews at 09:48

Thanks for you recent visit to my blog, and would love to see your take on the jack :)

This layout looks great and I'm glad I clicked on it to get a look at all the lovely details!